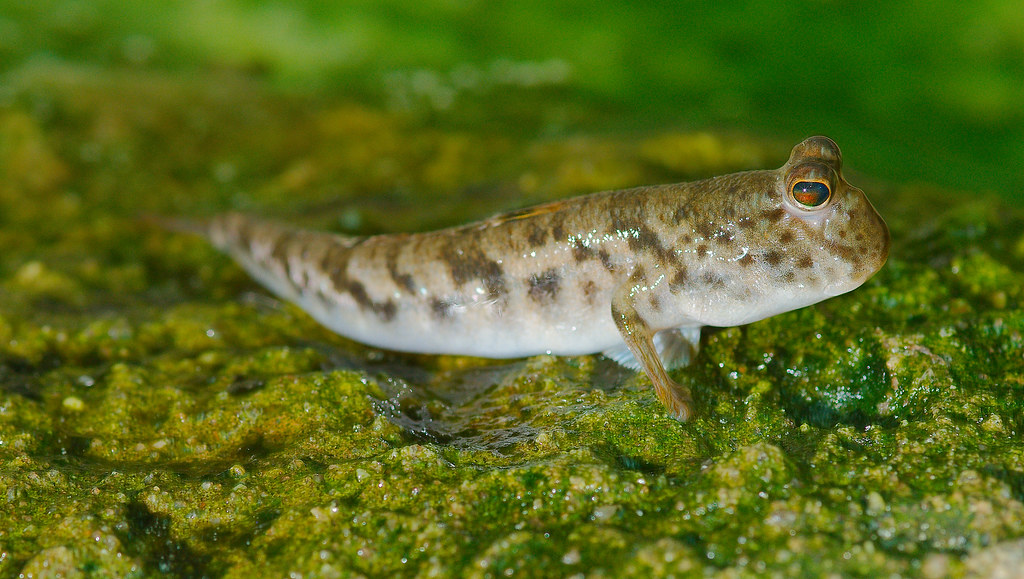 It is believed that the first fish to move onto land did so to avoid increased predation in the seas. This makes sense, because if there was little on land but plants and insects, it would be a safe place to be, so long as you could handle the sun. Today’s fish, not so much. If you’re leaping out of the water, you’re coming into a land that has birds, cats and crabs to eat you as well as the same sorts of insects that existed millions of years ago. This is of particular interest because those three types of animals (avian, mammal, insect and arthropod) have different kinds of eyes. Thus, if you want to be safe, you have to be able to see them without them seeing you. On top of that, you want your camouflage to work underwater as well. Thus, you get this type of patterning, where the top and sides match the rocks on which the fish sits and the bottom is lighter to blend in with the brightly-lit surface. You can also see a light speckling presumably helps to break up the pattern for those predators with eyes tuned for smooth expanses (such as the compound eye on an insect, I hypothesize).

One thing I’ve long wanted to do is get cameras that can see the infrared (like snakes) and the ultraviolet (like birds and insects). The camera helps you to see things you otherwise wouldn’t, and by adding things like macro lenses and microscopes, you can see closer like smaller animals do. Telephotos let you see like some birds. A polarizer can help you to see like some crustaceans and mollusks. But it takes different technology to extend the spectrum and, even then, it’s only an approximation. Still, I think it’s one worth (eventually) pursuing.