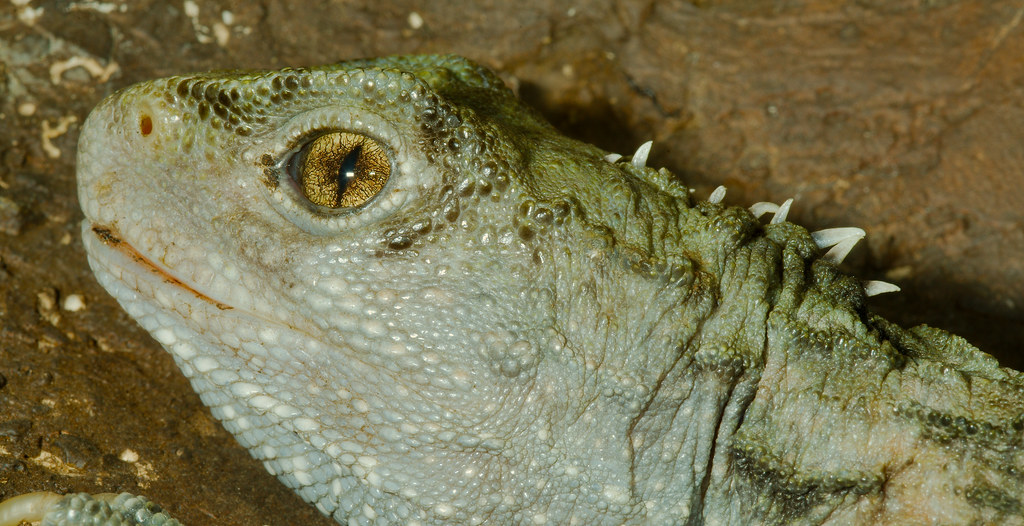 Many years ago, I was reading about evolution and extinction as I brushed my teeth (like ya do) and came across this little fact:

“Very little is known about the intervening history of these enduring creatures. As a matter of fact, there are no known fossils from any part of the Tertiary period – from 2 million to 70 million years ago. In modern times, their world shrank gradually to the confines of the New Zealand archipelago and finally to some 20 remote islets off the coast of New Zealand’s two main islands. Over that long time span, tuataras acquired odd physical attributes, including a third eye that remains in vestigial form at the top of the head.”

I stopped brushing and read that part again. Let me call it out for you in case you missed it:

That’s right.  Somehow, none of the numerous dinosaur books I had read as a kid bothered to mention that there were creatures out there with three eyes and that one was still with us.  I mean sure, it’s vestigial. You can only see it in the babies as it quickly gets blocked by scales as they grow up.  Still, three eyes!  How cool is that?

Thus began my quest to see a tuatara.

I searched for a zoo that had them, and they’re pretty rare.  They’re hard to breed and require a different sort of environment than the average reptile, so most zoos didn’t bother. However, the Saint Louis Zoo had one and I eventually managed a trip there. They have a huge reptile area, so if you like herps, it’s the place to go. I battled the crowd, did a quick walk through and eventually found it.

A large, somewhat isolated enclosure with two signs.  One said “Tuatara – New Zealand”.  The other said “Off Exhibit”.

This happens more often than you’d think.  The particularly rare animals, the ones that weird people like me make a special trip to see, are often the least understood. This means they have health issues more often than the rest and they’re just not available to see as often. It’s sad, but then much of the process of trying to see vanishing animals is sad.

The next trip was luckier. I fought the throng, made my way there and, finally, I got to see the tuatara. It was hiding in the enclosure. It took me a bit, but I eventually found it … fast asleep.  Not only did I not get to see the third eye (which I didn’t really expect to), but I didn’t get to see any eyes at all.

Disappointed, I took photos in the rest of the reptile area and wandered outside. I was taking photos of an alligator when I saw a zookeeper standing near me. I asked if the tuatara ever woke up, which started a conversation, as it’s apparently also rare for a non-zookeeper to be interested in the rare animals. We arranged a feeding time and I went back to set up.

About half an hour later, I saw some crickets get tossed in and the tuatara woke up. One cricket fell into her burrow, so she ate it (most non-photogenically, I’m sorry to say). I didn’t get many good shots, as she never really got out, but I did get this one that I like.  It’s only of one of her eyes and it’s not the special one.

But I think it’s a good eye nonetheless.