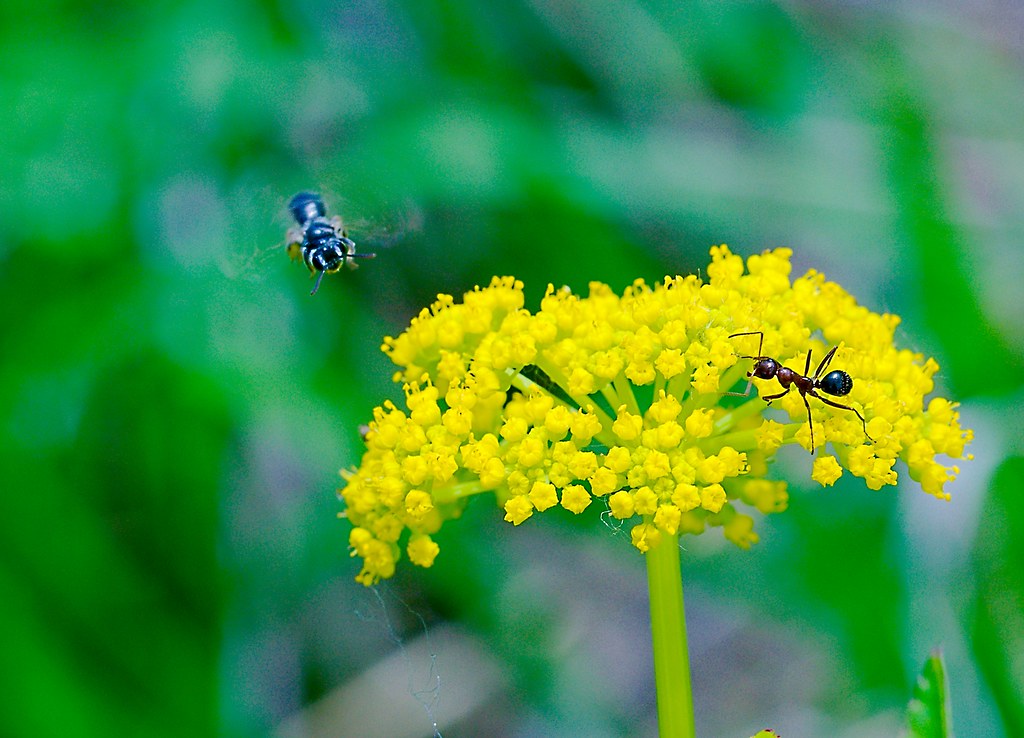 The ant and the bee both hatched in the early spring and were taught their respective trades by their elders. Every day, the ant worked hard bringing food into the colony. And every day, the bee worked bringing food into its own colony. Throughout the spring, rain or shine, they would meet at a different flower in the garden and divide that day’s pollen so each colony would get enough. On particularly nice days, a grasshopper would come by to chat, but they ignored him, for the work was more important. Their queens demanded obedience.

Summer came, and they were able to work faster and more consistently. Every time they met, they would exchange brief greetings, and then get on with the work. The work was critical. Work was how the colonies would survive. How the colonies would thrive. As they worked, the grasshopper would look on, occasionally playing his fiddle* and trying to get them to take a break and relax with him. He was always unsuccessful.

As autumn came, both the ant and the bee began to slow down. They were getting old. However, they kept working. To not work was nearly unthinkable. The grasshopper attempted to sway them to his way of life, holding parties in different areas of the garden. However, each time one of them thought about giving in to relaxation and joy, they would look at the other, the ant drawing inspiration from the bee, and the bee getting support from the ant. Though it was harder, they kept working, and both of their colonies began to prepare for the winter. They knew their queens needed their help if the colony was to survive.

Winter began with a cold breeze and a quick frost. Neither the ant nor the bee could leave the colony that morning, and it wasn’t until the following day when the thin layer of ice melted and they could leave for the garden. There, they saw no more flowers to harvest. They saw that, finally, their work was done. As they investigated, they came across the dying grasshopper, caught in the early frost. As he lay there gasping** he admitted that there might be some value in hard work and apologized for distracting them so often. He wished he had worked hard to prepare for winter. And with that, he died.

With great senses of self justification, the ant and the bee each returned to their own respective colonies. However, it was cold, and journeys that once took only a few minutes, consumed the remainder of the day. Dusk was falling when each reached their own home. The bee found the hive door closed and no way to open it. The ant found all the entrances and exits blocked. Each colony had sealed for the winter.

Night came, and with it, another round of freezing cold. Both the ant and the bee died, near their former homes, wishing they had each taken some time to play and enjoy their lives, at least a little bit.

Meanwhile, in each colony, the queens laid next year’s worker eggs, so they could live another year in comfort and bliss.

Moral: Those in power screw over everyone else. Also, winter kinda sucks.

* It is worth noting, in the interest of scientific accuracy, that grasshoppers do not play literal fiddles. Instead they rub their legs against their wings, in a similar manner as fiddles, but without the little tuning pegs, so their range of sound is limited. This is why professional musicians do not play grasshoppers.

** Technically, grasshoppers don’t have lungs, but they do move their body as air rushes in and out of their spiracles. Since this doesn’t pass vocal cords, gasping for breath doesn’t interfere with communication as it does in humans.