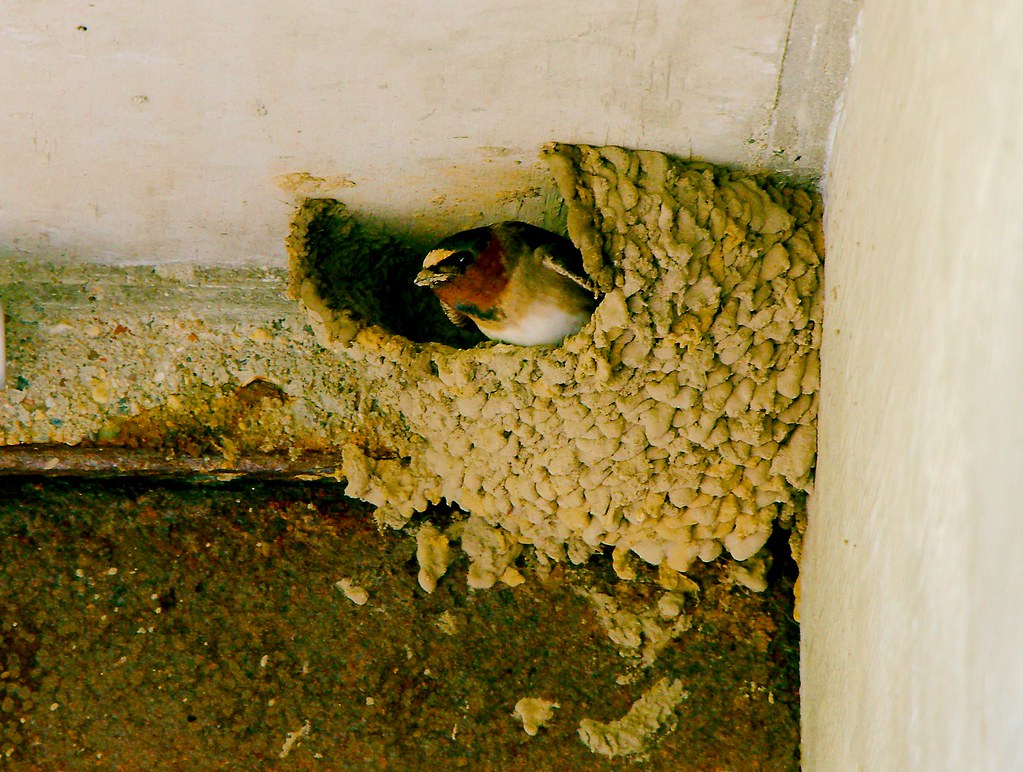 I had long wondered how these nests were made, so I paused for a while to watch them. First, each glob of mud is about one beak’s worth. Beaks hold a lot more mud than it looks like they do. They create a row of mud at the bottom of the nest. It’s a slow process because there is often little room for footholds, so they sort of spit it out as they hover in the air. If you’ve ever seen these guys fly you know they’re not exactly built for hovering.

Anyway, it takes a while, but they eventually get a row about three little mud globs deep and as wide as they need to land on them. It’s a good things birds are light and that summer days are hot, because the line is just about firm enough for them to land on. This is when they start to firm up the row and build upon it. Then it’s back and forth and back and forth between the mud and the cliff face (or bridge, in this case). It’s exhausting, and sometimes they pause to rest a bit. That’s when things get interesting.

See, they live in a group and some of them, once they’ve started, seem to decide that it would be nice if the mud were a bit nearer. Then their neighbor flies off to get more mud for their nest. Opportunistically, the resting bird will glance around to see if anyone is watching (humans apparently don’t count), and zip out to steal their neighbor’s fresh dollop of mud and add it to their own nest. Then they make sure to just be resting there when their neighbor comes back.

I watched this process happen about three times before the victim bird caught on and there was a bit of chasing going on. I don’t know how common it is, but it’s somewhat nice to know that it’s not just humans that are assholes to each other when they’re tired.