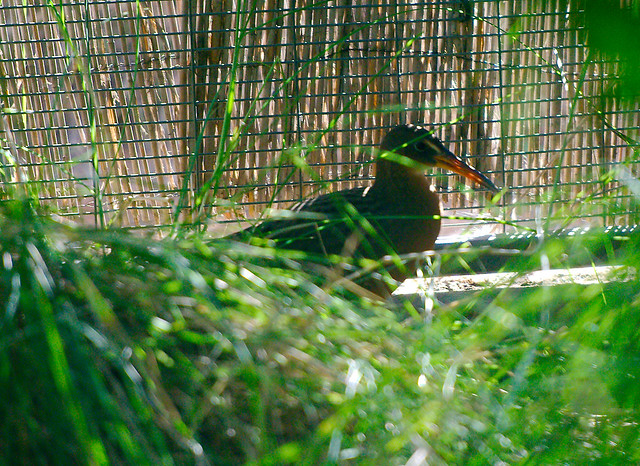 This is a bad photo of a Ridgway Rail. It is, however, perhaps the best photo I’ll ever get as their population declined by 51% between 2007 and 2008.

The question I ask myself a lot though, is “does it really matter?” I mean, there are lots of rails. I’ll be posting about a Guam rail in a few weeks or so. The Guam rail is interesting because it’s story is similar to the Wake Island rail. This was a bird that died out sometime between 1942 and 1945. Why? Well, there was a war on, there was an island and some abandoned soldiers. Basically, it was eaten to extinction … by humans … in living memory.

This is the pattern we’re seeing. On islands, in estuaries, and on mountaintops (or hilltops), animals are restricted in terms of both movement and resources. If something happens to the environment, then they run out escape room and, eventually, die out. When soldiers were stations on Wake Island, they liked the little birds, until they ran out of things to eat. This Ridgeway Rail lives in a very small area that is being developed and, where buildings are built, nests can’t be.

Today, we are seeing a massive extinction rate on these sorts of islands. It makes sense. Not only are humans building into the places that these animals live, but the creatures we bring with us, like rats, cats, and dogs, move into the remaining area and start eating eggs and whatever else they can get ahold of.

The problem is that we are also making new islands. As cities expand, and roads are constructed, we are basically carving up the remaining surface of the planet into a whole lot of little islands. Some animals don’t care. Birds can fly over highways. Deer can cross them. But some can’t. Jaguars won’t cross large roads because it means leaving their woodland, where they are safe. Small butterflies won’t fly across roads because they can eaten by birds if they’re in the open that much. Larger mostly-flightless birds won’t leave their little area because there’s guarantee of what they’ll find.

So as their living space shrinks, the genetics of each population start to homogenize. Thus, in addition to indirect threats like habitat loss/degradation and direct threats like invasive species, there is an internal threat from the species itself. If you cut any species into enough pockets (or islands) it’s not going to survive. We’re seeing this today with the rails. They live on islands and along coasts, so they’re bound to the land. They don’t really fly, so the populations stay static and vulnerable.

Will the world survive the loss of the Ridgeway rail or the Guam rail? Yes. They are a niche species and something will come along to fill that niche. However, I think the real question is, how many more species do we have to lose before we hit that one that can’t be replaced, and what do we do then?