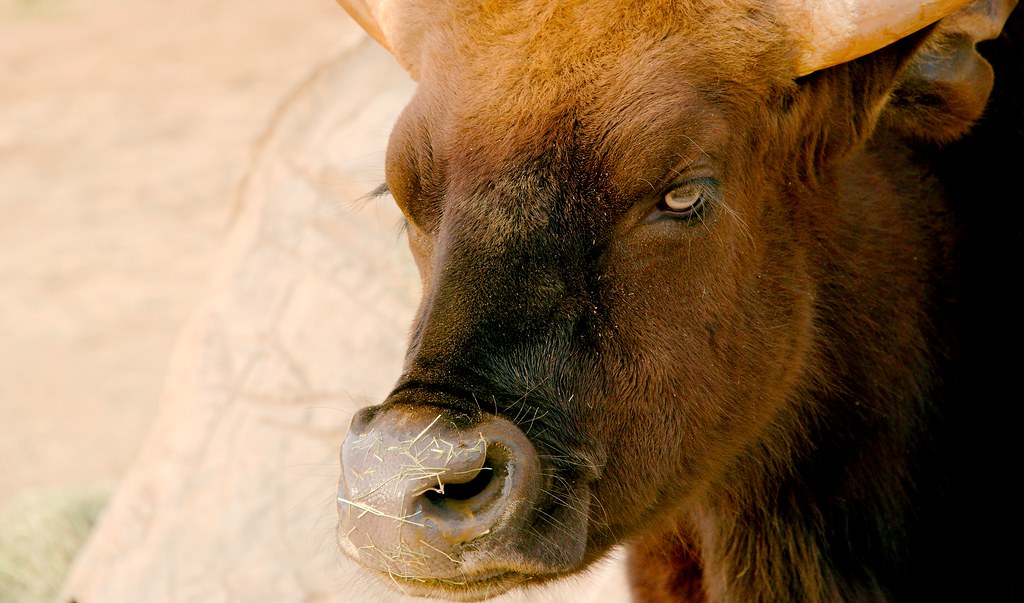 Wikipedia contains the following line: “While gaur depend on water for drinking, they do not seem to bathe or wallow.”

Let’s overthink about that for a minute, with differing emphasis.  (Lots of links. If you’re on FB, click the link (not the picture) to see the full post.)

1) “WHILE gaur depend on water for drinking, they do not seem to bathe or wallow.”
In most cases, the world “while“, refers to a period of time. However, it can refer to a contrast, but not the in the immediate time. The word “while”, referring to a period of time, can itself last for the entire first half of a sentence to see the contrast coming and then refer to it. This means that, at some point in humanity’s fast, we felt the need to create time-traveling conjunctions. What a world that must have been

2) “While GUAR depend on water for drinking, they do not seem to bathe or wallow.”
This implies that other animals do not depend on water for drinking, otherwise guar would not need to be singled out. This, as it turns out, is true. It is well known that desert animals like kangaroo rats and sand cats, get water from their food. However, some research also uncovered the interesting fact that mealworms also have this ability.

Now, when people say things like “an animals gets all the water it needs from its food”, it’s common to think of foot like sponges. After all, when you eat a piece of fruit, you know there’s water in there, so mechanically separating it from the food and not needing to drink makes sense. But there’s another way!

The Malpighian tubule system or cryptonephridial system moves some organs around and changes how wastes are processed through diffusion and active pump mechanisms, effectively separating urea, amino acids, sodium, and potassium from water. The water is then re-abosrbed. This is chemical* separation of water from the food and is a much older mechanism than the animals with which we are more familiar.

* It may not be technically “chemical”, as they may just be pulling out atoms and molecules dissolved in water. If this is the case, I am sure the Internet will correct me, because it’s good at that.

“While gaur DEPEND ON WATER for drinking, they do not seem to bathe or wallow.”
Can animals drink things other than water, in a “depends on” sort of way? Sure, we talk about hummingbirds drinking nectar, and baby mammals depend on milk to survive, but is there anything out there that doesn’t, at some point in their life cycle, need water?

It turns out that, thus far, the answer is no. All known life on Earth has DNA and, in order to replicate, DNA requires a polar solvent. Since one requirement for life to be considered life is replication, a polar solvent is needed for life. While there are other polar solvents available, no currently-known form of life uses them. This makes sense, given the ubiquity of water where we live.

However, ammonia is a potential alternative molecule*. It is polar and stays liquid at a lower range of temperatures than water does. So, on planetoids further away from their sun, it is certainly possible. However, the lower temperature does mean that, statistically, it would take substantially longer for life to arise and the fundamental question is whether they could make the jump to multi-cellular life before their sun burnt out.

Silicon, the popular option in science fiction, doesn’t look very likely because of temperature issues. Silicon has to get extremely hot, thousands of degrees (Celsius or Fahrenheit, doesn’t matter, you’d be dead) to become liquid. It is uncertain what would bond with it at that temperature to create biological molecules. Carbon and oxygen, of course, are right out.

Another option is hydrocarbon-based life. Such chemistry would not be polar, but it may be possible that lipid-based life could evolve. Again, this could work in a low-temperature environment, so multi-cellular life would face the same problem as in the ammonia scenario.

Hydrogen fluoride has also been suggested, though it seems to be rare in the universe.

On Earth, it took almost three billion years for single-celled life to become multi-cellular and, once they started, it suddenly happened independently in around twenty different lineages. It is believed that an uptick in oxygen created by cyanobacteria pushed oxygen levels to a point where they could not be absorbed into rocks and dissolved into water and, suddenly, there was enough oxygen in the environment that it could be absorbed by many layers of cells, so organisms that theoretically could have become multicellular at any point before suddenly gained a competitive advantage by doing do. So, if our goal is to meet intelligent life forms, which would likely need some level of multicellularity, we should probably keep looking for water. Ammonia and hydrocarbon-based life would likely need more time than our solar system has given them thus far (and is likely to give), and silicon-based life would be so hot that we likely wouldn’t have much to really talk about.

So, if we are going to find aliens, odds are that they would have similar biology to us. Sure, their DNA might use different bases (though research in artificial DNA is proving quite difficult), but they’re likely to need carbon, hydrogen, and oxygen in a water-based environment. The good news is that we’d have a lot in common. The bad news is that we wouldn’t have immunity to the single-celled organisms cooperating with their multicellular structures, nor would their have immunity to ours.

Which may be why they haven’t visited yet.

* Go ahead and search Wikipedia for “hypothetical”. Weeks of interesting reading, right there.

“While gaur depend on water for DRINKING, they do not seem to bathe or wallow.”
Most animals that we typically think of when we think “animal” need to drink, or “ingest water orally”. Sure, there are some, as mentioned above, that ingest water orally in the form of food, but what other ways are there to get water?

Fish are the obvious place to start. Do fish drink? Well, it turns out that the answer is “yes and no”.* Freshwater fish absorb the water they need directly through their skin and gills. Saltwater fish, however, gulp in water and then their gills filter the salt out. So, if you are watching a fish opening its mouth under water and it’s a salt-water fish, it’s drinking. If it’s a freshwater fish, though, it’s likely breathing (bringing in water to push out through its gills).

Amphibians also absorb water through their skin, particularly through ventral patches that contain aquaporin. Aquaporin are basically channels in cells that allow water to flow through them. This is basically the “plumbing” of cells. Interestingly, since salt water fish predate fresh water fish, this means that fresh water fish likely evolved these channels from internal water “piping” to external, because evolution greatly prefers recycling to creation.

The answer is yes!

The thorny devil lizard drinks through its foot, but has scales. It is believes that the scales perform a wicking function pulling water up to the sensitive skin regions … though in this case, those regions are … in the mouth.

That’s right. There are channels in the scales that pull water from the lizard’s foot, or head if dew is collecting, all the way up it’s body into its mouth. Those little lizards beat humanity to the crazy straw by several million years.

** Is that where cocktail dresses came from?

“While gaur depend on water for drinking, they DO NOT SEEM to bathe or wallow.”
An interesting personal note. I’ve always been interested in biology, but really, I have a deep-run desire to know why things are the way they are. As a kid, reading Thornton Burgess stories, it was biology. When I was about twelve and reading the encyclopedia (Yes, I’m a geek, but not a total geek. I got tired and stopped somewhere in the middle of “S”.*), the interest shifted to chemistry, as that is what biology was built on. In high school, this became physics, as that is what chemistry was built on. That lasted until graduation when I ran out of studies and had to start working. After some stagnation, I started noticing the same sort of patterns I’d seen in biology, chemistry, and physics in the working world.

That led to my self-driven studies into economics and psychology or, as I think to think of them, the study of the why people are they way they are. We basically live in a world of tiny things, be they particles, waves, strings, or as I like to think of them, little blobs of jello. These little things work together in ways that are described by quantum physics. The things they build are described by atomic physics. The things those build are described by chemistry until they start to do things on their own. (If they don’t do things on their own, they just keep getting bigger until relatively happens) That’s where biology comes into play. When the biological things become selfish, economics appears and when they start to deliberately manipulate others selfish things, psychology describes that. Math, of course, is a tool used to describe patterns at all these levels.

One thing that is interesting about the universe is that what is “seems to be” at one level is entirely explained at another and entirely irrelevant at yet another. To truly understand a problem, you have to consider it at multiple levels.

* The “S” volume was really heavy.

“While gaur depend on water for drinking, they do not seem to BATHE or wallow.”
Bathing is interesting. Throughout much of history, humans have bathed in different ways, but mostly in water and soap has been used erratically. However, many animals take dust baths. Rhinoceroses and elephants take mud baths, where the mud forms a protective layer over the skin and, as it flakes off, take away parasites and other irritants. Fish will have these removed by getting other fish to eat off their skin and, in some cases, by swimming up to a shark and rubbing their bodies against their sand-papery skin.

Wallowing, on the other hand, is apparently subtly different enough from bathing that we need a different word for it, though both come from the German language. For example, while both involve submersing yourself, only bathing requires a liquid. You can wallow in mud and you can bathe in mud. However, while you can bathe in the blood and tears of your enemies, you can only wallow in sadness and melancholy. Interestingly, if you do a word fight with these, you’ll see that “bathe” is older and generally more popular. However, sometime in 1625, there was apparently a bathing war and wallow became significantly more popular until bathe fought a counter offensive in 1650 and beat wallow back down. Wallow had a brief resurgence in 1675 before bathe won once again and has kept wallow in a subservient position ever since.