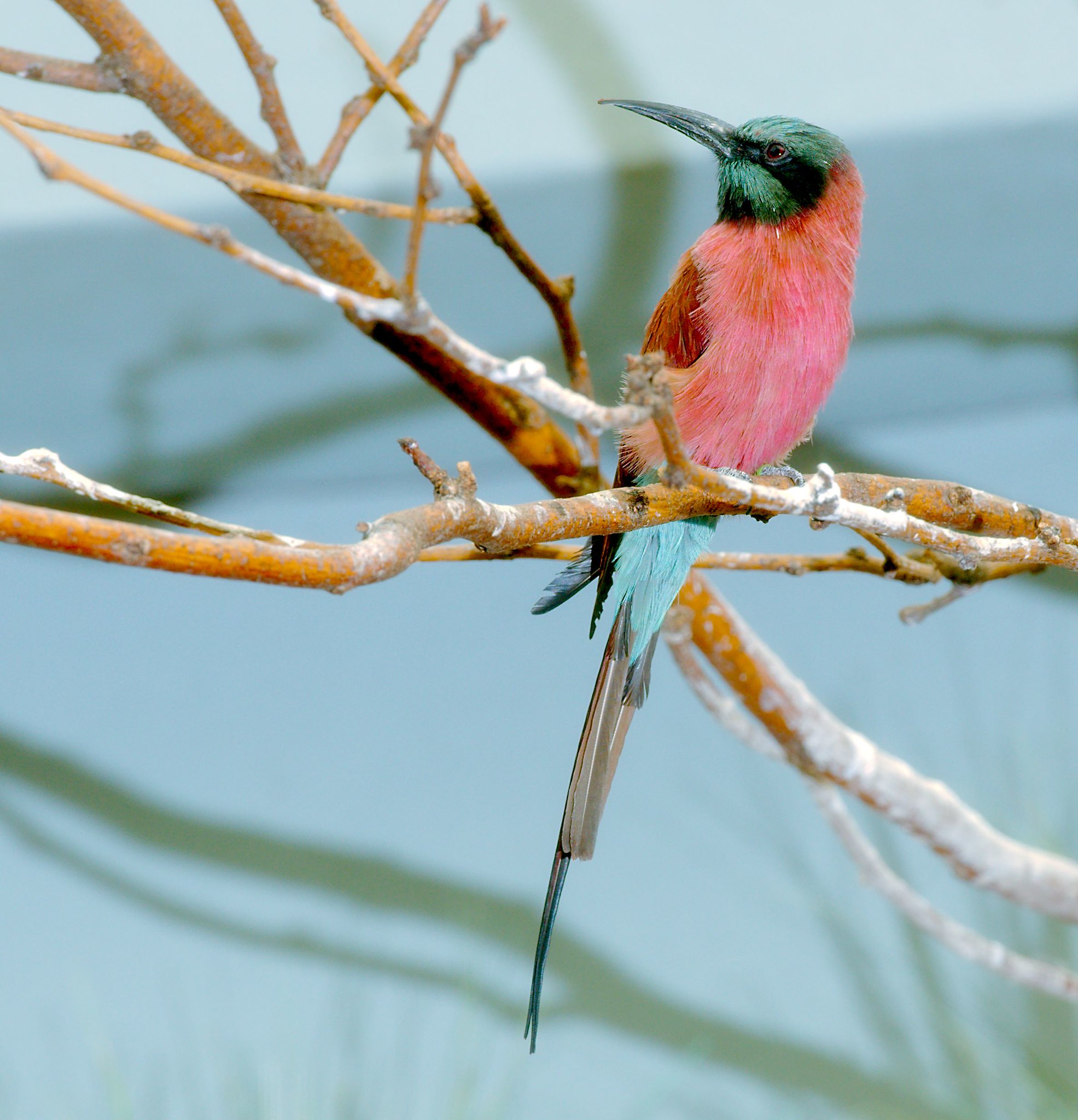 Sometimes you read a name and go “hmm”. This often leads to wikitrails.

In this case, the word carmine is a word for deep red. It is linked to cochineal, which is a sort of insect from which red dyes have traditionally been made.

From wikipedia, the etymology goes: carmine <- carmin (12 century French) <- carminium (medieval latin) <- qirmiz (Arabic) <- carmir (Middle Persian). The word "carmir" means, as one might expect, "red". So far, so good, but here it gets interesting ... "carmir" is believed to come from "kṛmi-jā", the Sanskrit word for "insect-produced", as "krmi" means "worm" or "insect". But that's okay, right, because the cochineal makes the carminic acid from which the dye is made. However, while today they are rather wide-spread, back in the days that Sanskrit was commonly spoken, the cochineals were only found in central and south America. Barring some of the rather interesting and, shall we say, wildly hypothetical, websites out there, between 2000 and 600 BCE there was very little knowledge in India about how the Olmecs were making cloth in what we now call Mexico. So how did this happen? The answer is that, in the Mediterranean area, a scale insect called "kermes" also produced a red dye, from which we get the word "crimson": crimson <- carmesinus (Latin) <- qermez (Arabic) <- kṛmi-jā (Sanskrit, again). Carmesinus, of course, is where we got the word "carminc" for the acid. But wait! Did India trade with the Mediterranean world when Sanskrit was being spoken? After all, if the kermes only lived in the Mediterranean world, how did kṛmi-jā come to be borrowed in the first place? We know that Scylax, a Greek explorer, was sent to explore the Indus river in 515 BCE. Is it possible that he traveled so far, he fell through a time portal and went back at least another century to land in India where people could marvel over his red clothes and, as he explained how they were made, they came up with "kṛmi-jā", so we could eventually get the words "carmine" and "crimson"? I'm sure there is a website out there somewhere that offers this as proof, but this explanation seems somewhat far fetched to me. However, according to Mira Roy who studied the red dyes of pre-colonial India in 1977 (aren't you glad someone did?), the word krmi/kermes does appear to enter the language in the post-Vedic period (500 BCE to 300 AD). More interestingly, she points out that there were three insects from which red dye was produced: - The lac* <- lak (Persian) and lakh (Hindu), whose name comes from "hundred thousand", referring to the number of eggs it took to make the dye (though I doubt they actually counted them to that level). - The indragopa which is mis-translated by Mira Roy (and many Indian dictionaries) as the cochineal. As noted previously, this can't be right, because the cochineal is South American and didn't reach India until well after the name kṛmi-jā was applied to mean red. This is covered in decent detail by Siegfried Lienhard who concludes it's actually a red velvet mite, which is bright red, but not useful for creating dyes. - And finally, our old friend, the kermes or krmi, which was very popular in Europe for dyeing***, but that as Mira Roy notes, was only discovered to have the dye-producing properties in the POST-Vedic period. So what do we have going on here? 1) We have a word that is believed to originate from a Sanskrit word 2) An insect that was known to make that red dye in Greece, but before the Greeks encountered the Indians speaking Sanskrit 3) An insect that was known to make that red dye by the Olmecs, who (we sure hope) never encountered the Indians at all 4) An insect** that is bright red, was known to the Indians speaking Sanskrit, but that cannot be turned into dye All of this probably means that the word "kṛmi-jā" is a false etymology. It is more likely that the root of both "carmine" and "crimson" has nothing to do with mites or scale insects at all, which makes sense because neither does this bird. It eats bees. ---------------------------------------- * Amusingly, these insects are referred to as subsisting on trees that produced "electrum", which meant both an alloy of gold and silver and what we now call amber. It likely meant the latter first and was later applied to the alloy because of the yellowish colour of the alloy, even though we now know amber exists in many colours, only one of which is called "amber". ** Technically not an insect *** This is where "in the grain" comes from, as the kermes eggs were so fine they were referred to as "grains", but that have nothing at all to do with actual grain. More information: - Siegfried Lienhard on "indragopa": http://www.indologica.com/volumes/vol06/vol06_art14_Lienhard.pdf - Philip Smith on amber: http://penelope.uchicago.edu/Thayer/E/Roman/Texts/secondary/SMIGRA*/Electrum.html - Mira Roy on Indian dyes: http://insa.nic.in/writereaddata/UpLoadedFiles/IJHS/Vol13_2_2_MRoy.pdf - Sanskrit: https://en.wikipedia.org/wiki/Sanskrit - Crimson etymology: https://en.wikipedia.org/wiki/Crimson#Etymology - Carmine etymology: https://en.wikipedia.org/wiki/Carmine#Etymology - Kermes: https://en.wikipedia.org/wiki/Kermes_(dye) - Cochineal: https://en.wikipedia.org/wiki/Cochineal