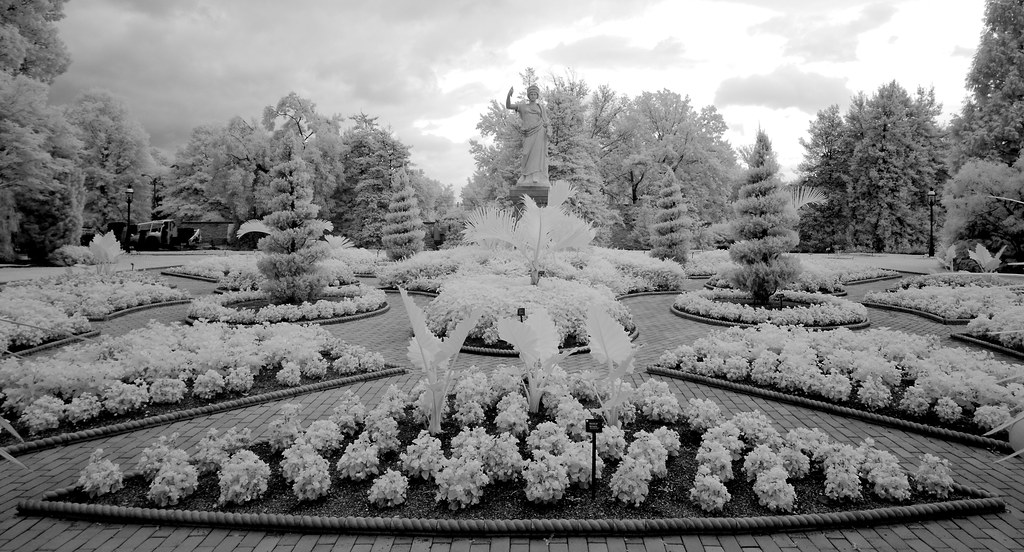 It looks a lot cooler than it actually was. 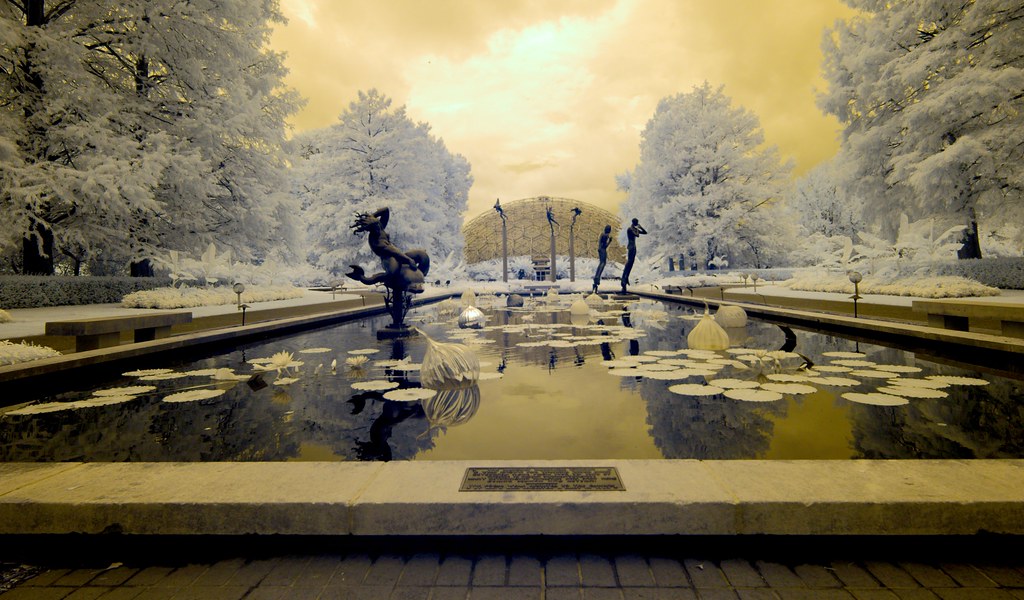 I take infrared photos during the day because the statues come alive at night.

For those of you wanting an infrawhite Christmas.

There have been rumours of a fountain of gold for centuries. Alas, these three explorers found the fountain of rock first. 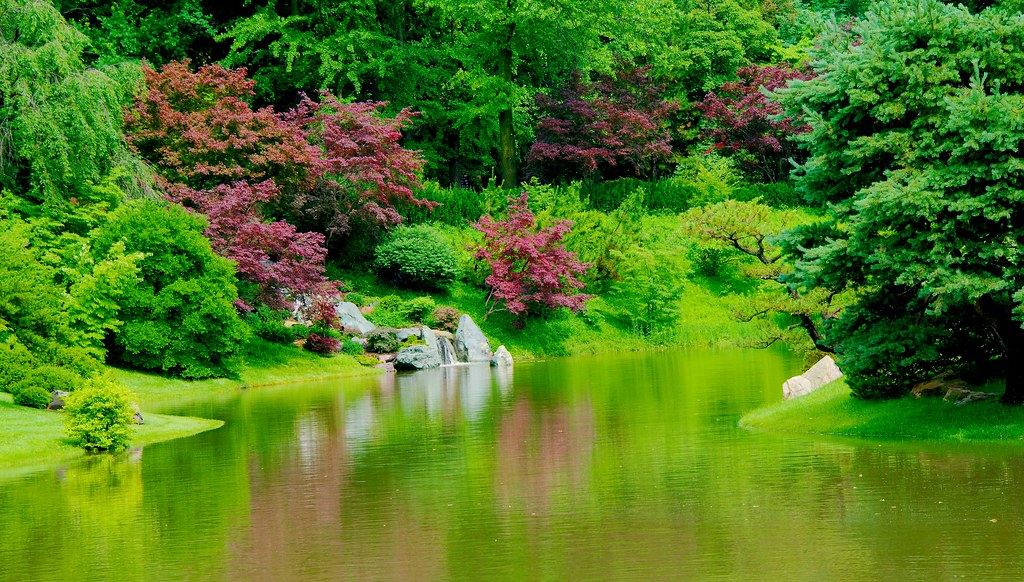 Ever notice there are no anthocyaninic pine trees?

That’s because they heard us calling them “evergreens” and traveled back in time to make sure they’d evolve that way.

They also volunteer to come into our houses in the Winter to keep us company, shelter presents, and give our cats places to exercise. 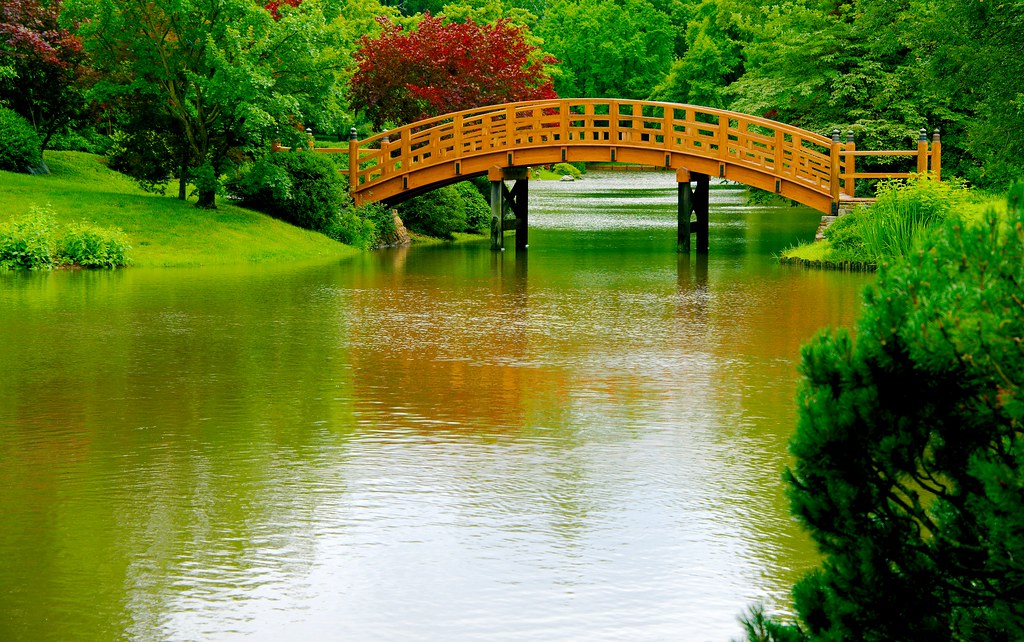 I’m not nearly as much an expert in botanical gardens as I am with zoos, but I’m pretty sure there’s a troll somewhere under there. 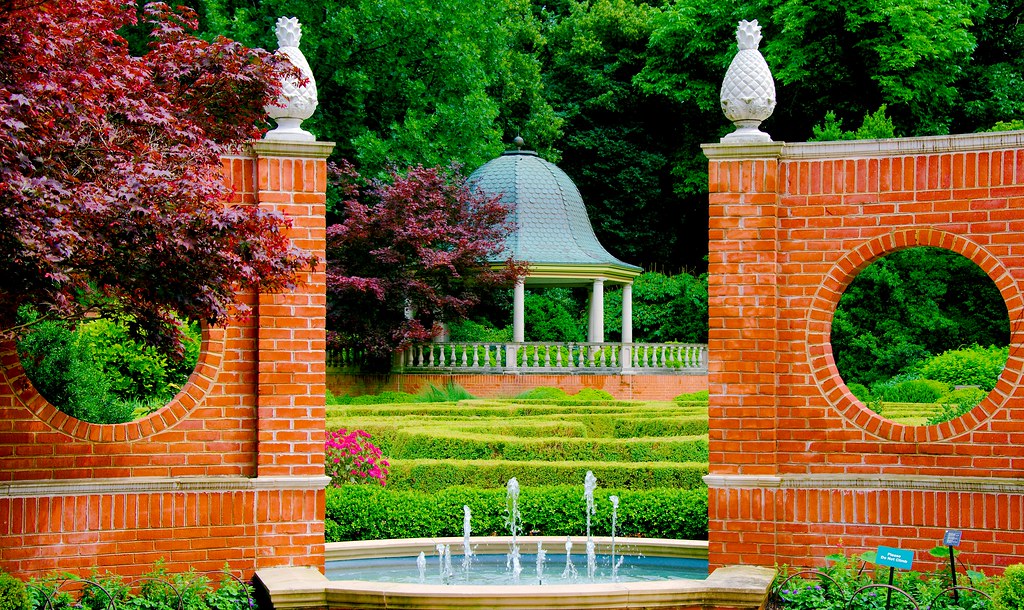 One trick to a good photograph that mixes architecture and nature is to make is to use flawed symmetry. The lack of perfect balance forces the viewer to stop and consider, just a bit, the imperfections of reality and how, upon further thought, they are preferable to the alternative.

He was torn. He loved her, he thought, but he also loved his family. He remembered his father’s words, making it clear that he was to work the farm not chase after “some damn glittering fog devil”. She, on the other hand, was wonderful. He’d met her by the lake, seen her dancing in the mist, mere hair-breadths above the surface of the water, shining in the rising moon. When she’d seen him, she winked as she sank out of sight, leaving nary a ripple behind.

He settled for coming back the next day, or maybe he’d stayed. He couldn’t quite remember, his mind’s eye full of the soft flow of hair, the flick of a wrist, the quick glimpse of a toe.

That morning, as he sat by the lake waiting for the sun to rise above the mountains, he felt cold and damp, as expected, but he also felt strange … uncertain whether to call out or hide behind the boulder, uncertain whether to give up and go home, or to go home, bring back a boat and row out to meet her. Then he saw her eyes gleaming in the distance, staring deep into his.

He lost track of time as she danced and, again, vanished.

The next day … perhaps later on the same day … he thought back to his gran’s stories, about the young men and the women of the village that had vanished. He knew that it has something to do with the people in the mist, but so few could describe them to him. He’d only ever heard about people that saw them from a distance. He knew he had to talk to his gran … eventually. Maybe he’d wait just a bit more.

His gran couldn’t tell him anything that he didn’t already know. She mentioned that someone she had cared about when she was his age vanished, but that it was OK because she’d met his paps, and eventually come to have his father. She warned him away from the lake, like she always had as far back as he could remember. He didn’t listen though.

She’d danced closer then before slipping away from his sight as he was dazzled by the bursting sun. He remembered running for home to talk to his father, though it felt as though part of him remained behind. His father swore at him, but that was nothing new. He was reminded of his mother’s disappearance, of his paps’ disappearance, of everyone he’d known all too briefly and how, in each case, they’d been seen near the lake and then never again. The only way to be safe was to stay in the town, and work. “Just work!” his father said, not knowing why it was so hard for him to understand, but then, his father had never seen her dance.

The next thing he knew, she was dancing again, and he was lost in thought, thinking of differences in the lives he could live. He thought of safe lives … working the farm as his father wanted, seeking his fortune in the city as his gran wanted, getting a berth and sailing the sea as he used to want, building a cottage and starting his own farm. Or, of course, raising the nerve and stepping into the lake. All this he was thinking and almost didn’t notice when she danced ever nearer, reaching out, touching his forehead.

His gran and father sat in the old run-down house, staring at one another, but seeing neither. They hadn’t heard from him since he ran after that hare into the woods, ignoring their calls to return. They couldn’t chase him down, he could run far faster than either of them could anymore. All they could do was stand, out of breath and watch him run off in the direction of the lake, days ago.

Meanwhile, there he sat, alone with his branching thoughts.