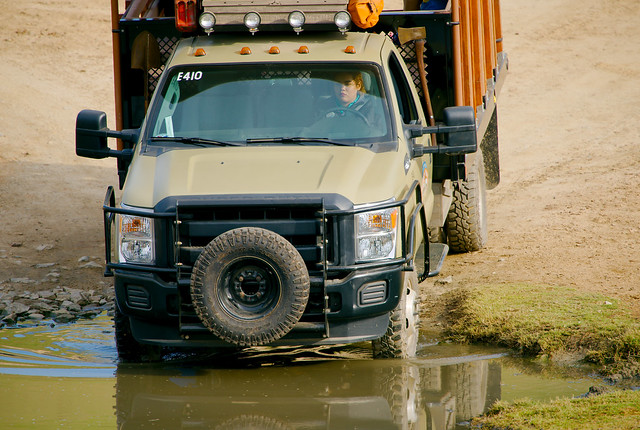 In December of 2015, I returned once again to the San Diego Safari Park (formerly known as the San Diego Wild Animal Park). When I set up the trip, I had planned to re-visit Nola (first visit described here: http://stories.starmind.org/northern-white-rhinoceros-ceratotherium-cottoni/ ), but that turned out not to be possible. Since the trip was already booked, we pivoted to focus on the Bird Breeding Center (aka the BBC, but not that BBC.)

Upcoming photos will focus on rare birds as well as the normal sorts of photography I do. The difference with the birds is that, unlike a zoo where birds are on display, a breeding center is more focused on creating privacy for the birds (so they’ll mate). This means that angles and lighting are even harder to get right than in a traditional zoo setting.

So, to make up for the upcoming lack in quality, here is a photo of a worker driving a safari truck into the little rivulet.

This shot was taken from half a mile away.