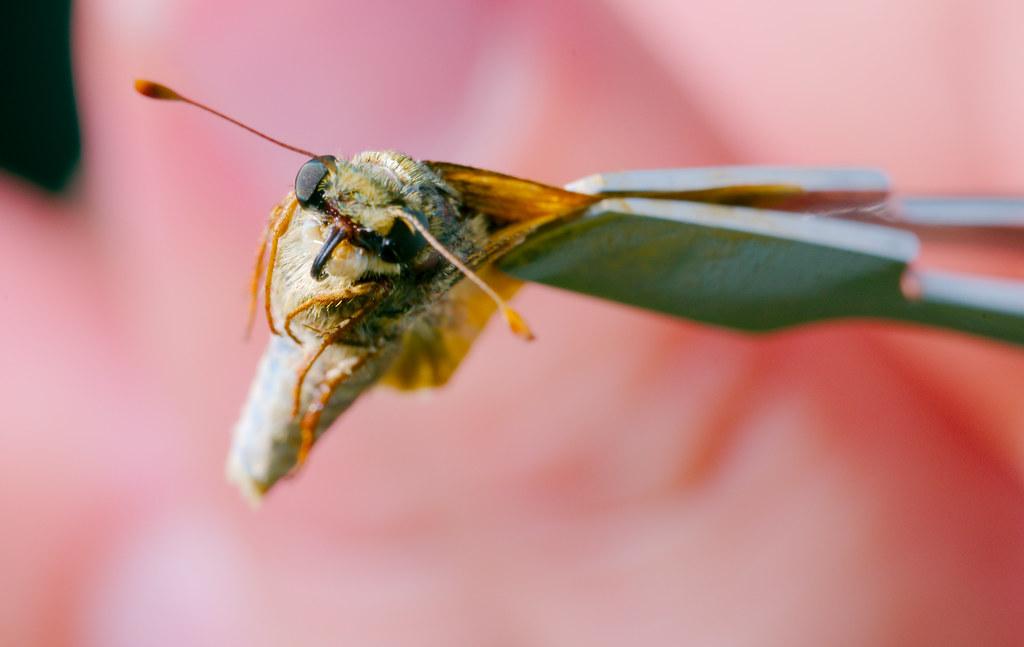 This is a pawnee skipper, though the photo is misleading as lepidopteral tweezers are not actually a common predator. I was fortunate enough to see this species because I won a butterfly outing at a fundraiser for the Minnesota Zoo.

(Side note: Oddly, I was the only bidder … who doesn’t want to spend a day climbing hills pursuing endangered butterflies? What’s wrong with people?)

Anyway, we set out early in the morning to get to an area of untouched post-glacier land in Western Minnesota, where we started checking out hills. Did you know that there are some butterflies whose life-time range consists of the top of a single hill? Scientists call it “hilltopping”, but I call it a rather limited world view and a risky strategy. Nonetheless, there exist these butterflies called the pawnee skipper that are rare to begin with and, as humans level hills to make land for farming, they’re getting ever more rare.

Counting them is also difficult, because they fly really quickly and they all look like one another (a not uncommon problem for counting a species, actually), so when we caught this guy, we put him in an envelope for a while to see if any more came out. We then saw two more, presumably fighting for the top of the hill, as we’d just caught the alpha male.

(Side note: Yes, you are living in a world in which there are not only alpha butterflies, but in which butterflies fight with one another to become alpha. Think of it as Barbie Mariposa and Her Butterfly Fairy Friends meets Fight Club.)

After counting three, which was two more than last year’s count for that particular hill, we went off for more generalized butterfly catching. I was tired, as I’d only been home from Peru for about three days, but the times in which this sort of work can be done is limited. Butterflies don’t live long, after all, and the conditions have to be just right. I am hopeful that I’ll be able to do this again and that we’ll hopefully also be able to set something up more locally so more people can join us.