I have been trying to write this post for over a year and I have to face the fact that I am just not a good enough writer to make it what I want.  So I’m just going to write. 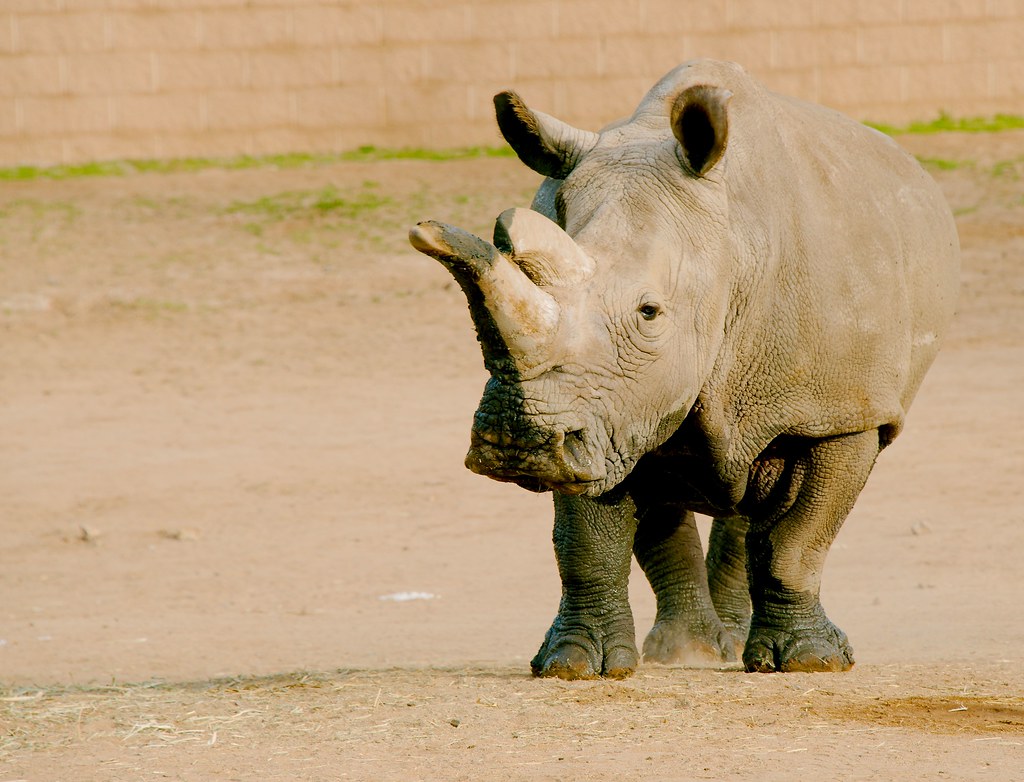 In January of 2015 I decided to fly to San Diego to see Nola. Nola was, at the time, one of five Northern White rhinos remaining on the planet. It wasn’t easy to figure out.

The San Diego Safari Park is structured like a normal zoo in some respects, but about half of it is not for people. They have a wide open expanse mimicking the African and Asian plains. The animals are free to wander and live their lives as they will. When you visit, you have two options to see them close up – cart or caravan. The cart winds its way around the edge, so you can see most everything, but far away. The caravan is a truck that goes out directly and drives a route through the middle of the plains, so you can see some things close up, but can’t see everything.

The problem is that there are places where neither the car nor caravan can go. This, of course, is where an old animal would choose to spend her time. So I needed another option.

That option was the Ultimate Safari. It’s not cheap, but it is exactly what I wanted.

Once I arrived, I met Alan Treadway, who was to be my guide for the day. The day consisted of many things specifically chosen to meet my interests. I got to see the cheetah breeding area (and pet a cheetah). I met an aardvark, kinkajou, and some singing dogs. I also met with some stem cell scientists who had 14 times as many Northern White rhinos frozen as stem lines as out on the plains. Then I got to feed two okapi(s), some Indian rhinos, and some sitatunga(s). Then, as the sun was setting low, we went out into the fields.

It took quite a while to get to where Nola was, but once we got there, I saw her. 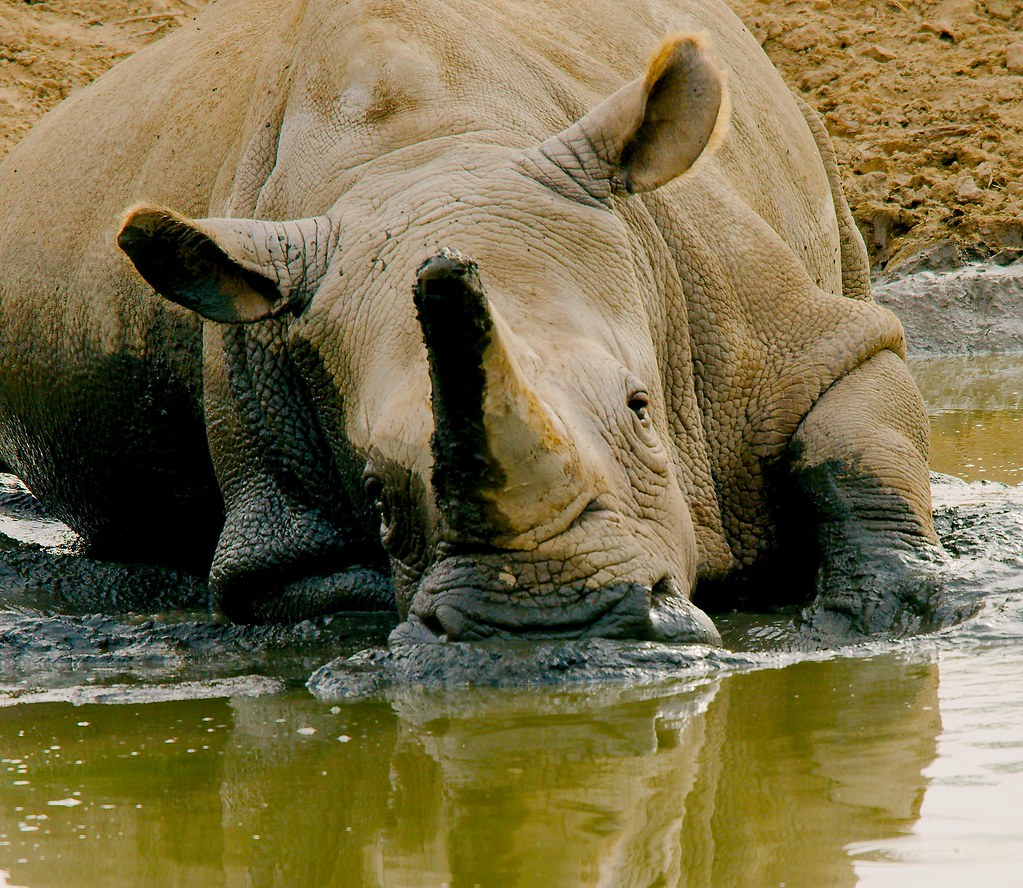 She was sitting there, in the mud, looking completely alone. It was somehow fitting that she lived in a field with tons of other rhinos, but was still completely by herself. It was somehow poetic because globally, the Southern White rhinos have recovered quite well, living (through the help of breeding zoos) all over the world while their cousins, numbering only three, live in isolation.

I was looking at a species that, within the next few years, will have vanished entirely from the earth.

We drove around to get another angle. 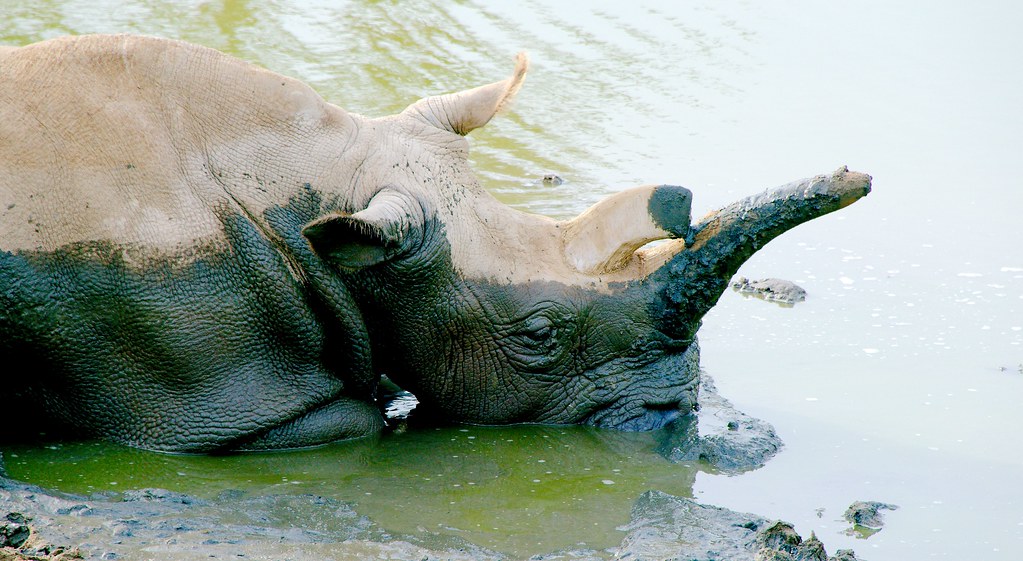 I watched her lay there and realized that, while she was alone, it felt more like solitude than loneliness. She didn’t seem upset, or sad, or happy for that matter.

Then again, unless you’re actively giving them an apple, it’s hard to tell if a rhinoceros is happy. 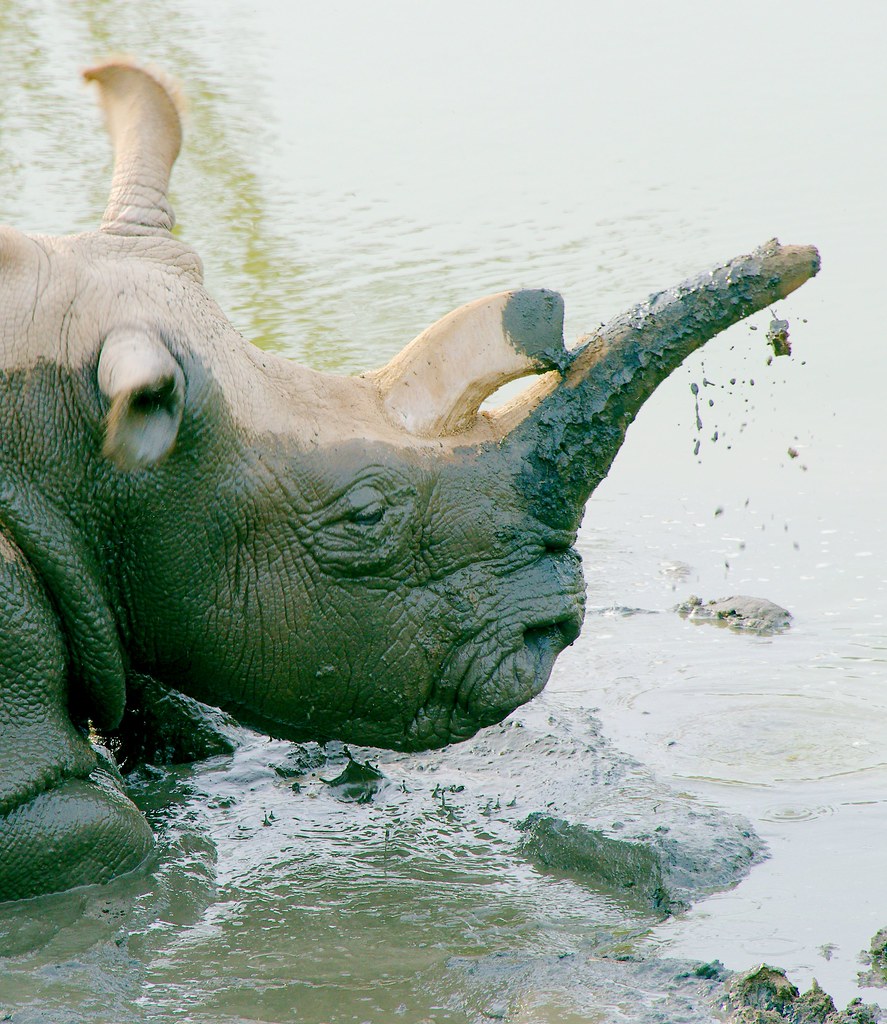 However, she did seem to enjoy dipping her horn in the mud and oozing around a bit. I guess if you’re a well fed rhino on a warm day, laying about squelchylike may well be the extent of your desire. I took photos for a while and then stopped and just sort of watched her.

There are things you can notice when you take the time. A lot of people, when they think about rhinos, don’t think about the little tufts of hair on their ears, how their feet are built to support their weight, how their skin looks almost twice as big as it needs to be yet just falls into place as they move around. They don’t think about their tiny eyes. Naturalists talk about how rhinos can’t see very well, but their hearing is excellent and their nose is amazingly sensitive – not surprising, given how big it is.

As Nola sat, and I watched, I saw that she was alert. Her ears and nostrils were in constant movement. Then, just as thought I had seen everything there was to see … 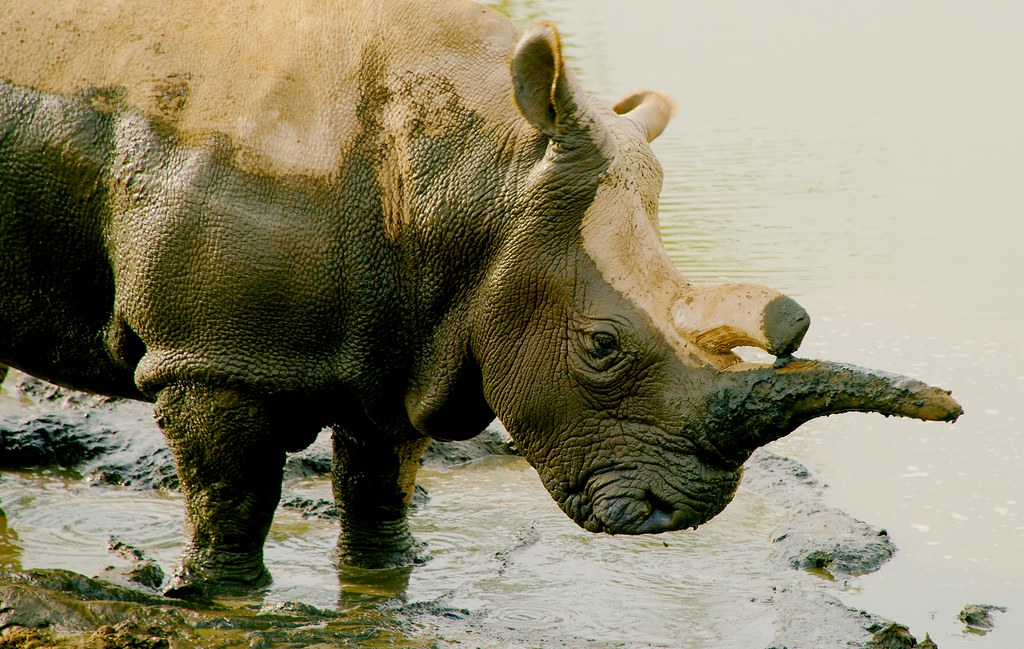 The light had changed and the sun was near the horizon. I am not so naive as to think that she was posing for me, but truly, the light was perfect.

Then, to my surprise, she walked nearer. She wasn’t running, just slow, steady, methodical walk over to the truck.

In the movies, when something heavy walks, the camera jumps with each step and the speakers play a low bass thump. Everyone remembers the ripples in the water in Jurassic Park.

In real life, none of that happens, of course. However, you can sense mass. Rhinoceroses are huge. They can weigh up to six tons – twice the size of an average car. A rhino running a full speed (30 mph) would hit with the same force as a car going 55mph. When something that size comes towards you, even if you’re in the back of a big heavy truck, you notice.

As she came nearer, I stepped away from the camera with the big lens and picked up the spare with the wide lens, as it can focus more closely. I leaned out to get a shot as she came closer, thinking that it was going to be the best and closest shot I’d be able to get.

Then I put the camera down.

With Alan’s permission, I reached out to touch Nola, one of the last of her kind, the only Northern White rhino in the northern and western hemispheres, as she stopped by the truck.

She was rough, covered in mud, and felt like a boulder. But she was also warm and alive. I touched her back as she walked past and I felt like time itself, sliding over muscles and sinew, soon to be gone, never to return. 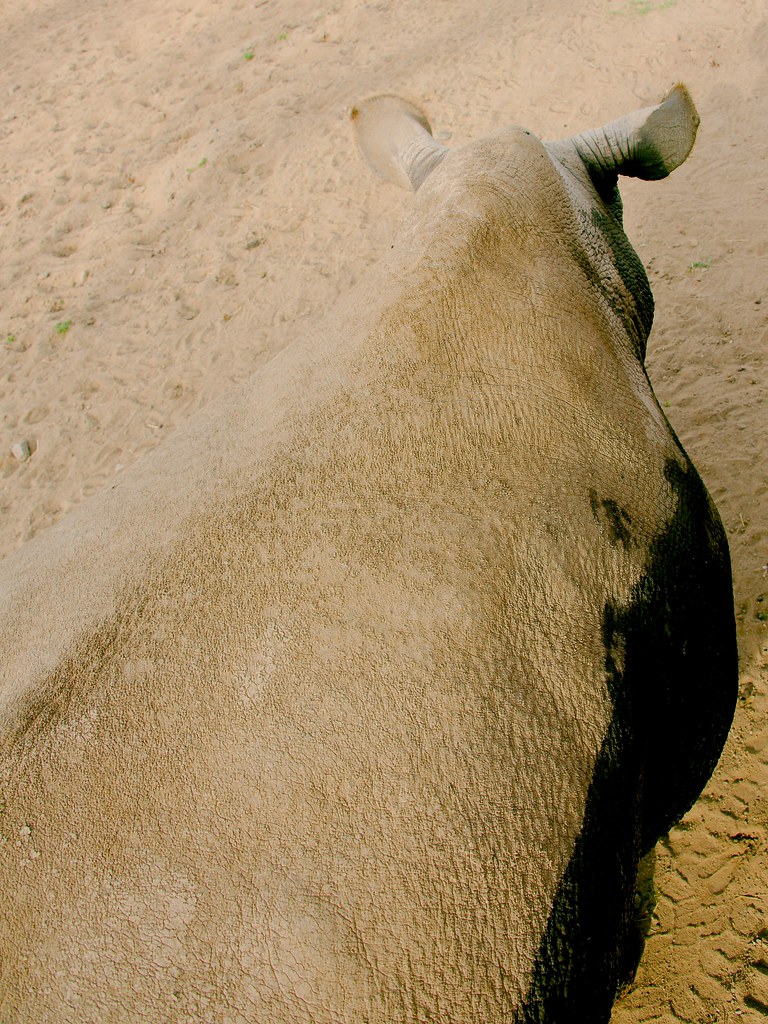 I got one last shot as she wandered off and my time there came to an end.