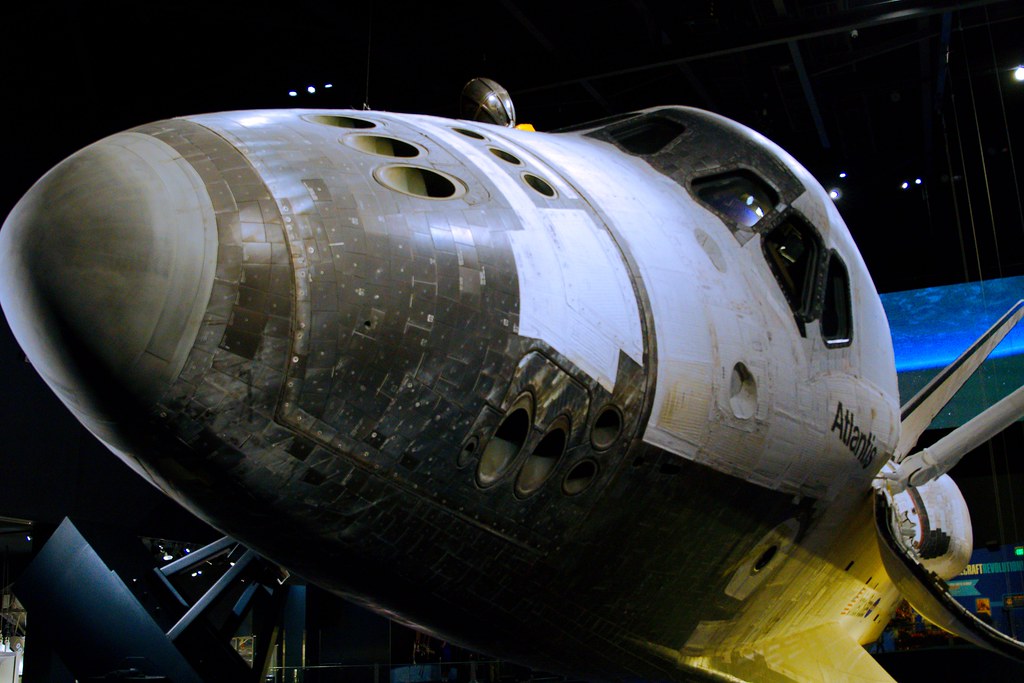 I promise I’ll get back to posting animal photos soon. In the meantime, here’s this.

This is a space shuttle orbiter. Back before the United States became afraid of aliens*, we used to send these things up fairly regularly. We made six of them. As of a couple months ago, I’ve seen them all.

1) I saw the Enterprise when I was very young and the family visited the National Air and Space museum in D.C. I barely remember it.

2) I saw the Columbia from afar one evening while at an outdoor concert. It was long enough ago that I don’t fully trust my memory, but I remember it going overhead on the back of a plane, the musicians and audience going silent as it flew by.

3) I saw the Discovery a few years ago at the National Air and Space museum annex in D.C.

4) I saw the Endeavour earlier this year at the California Science Center in L.A.

5) In early May, I saw Atlantis at the Kennedy Space Center, which I visited because it was too windy to go kayaking that day**.

6) The only launch I saw was Challenger. I was eight years old. My mother and brother went off to school, my dad staying home with me. Since I felt awful, my dad decided to cheer me up by letting me watch the shuttle launch. I was pretty interested in space, and we had been paying attention to this particular launch because it was to be the first in a line involving civilian teachers. My mother had told us about the program and mentioned that she was going to apply, but that she’d withdrawn her application because my brother and I were so young. She hoped to try again when we were older. I was excited as I watched the launch prep on the TV, thinking about how cool it would be when I got to see my mom go to space and see a real-live launch.

Through the static of our small television, I watched the launch begin. Minutes later, I saw something that, at the age of eight, had never crossed my mind as a real life possibility.

A few months after that, NASA canceled the teacher in space project.

My mom never went to space.

She did, however, come home from school later that afternoon.